How does carbon dioxide indoors affect us?

Air is a word most of us are quite familiar with. We all need air to breathe. But what is air really? It’s a gas mixture that is everywhere around us in earth’s atmosphere, and it consists mainly of nitrogen and oxygen, but also carbon dioxide. To be more precise, it consists of this:

Often when we experience bad air we tend to say that “there’s no oxygen in the room”. But that’s not true at all. It is actually the last percentage of the content of the air that we should focus on instead of the oxygen. The percentage that consists of, among other things, carbon dioxide and a number of other gases.

What is carbon dioxide?

Carbon dioxide (CO2) is a naturally occurring, odourless gas, which is measured in parts per million, ppm. It is formed by the breathing of all aerobic organisms (plants, animals, fungi and many microorganisms), and is a natural part of the cycle shown below. 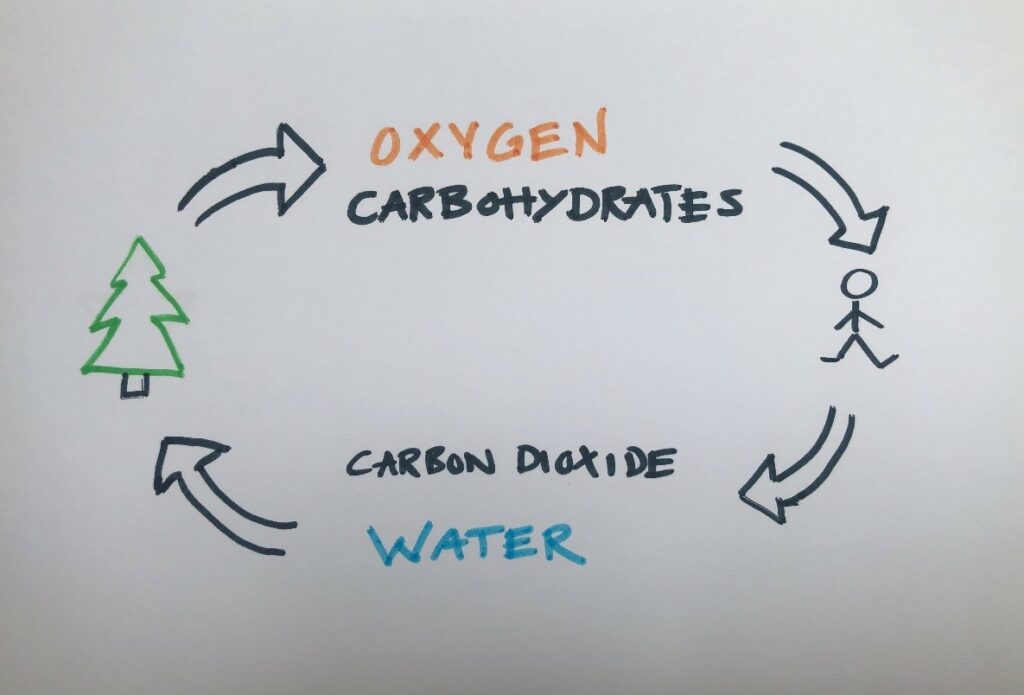 Energy comes from the beginning from the sun. Plants capture the energy in sunlight in photosynthesis. The energy is then used to carry on the chemical reactions where carbohydrates are formed.

People and animals eat food to get energy. The energy is released during the cell respiration when the oxygen burns the carbohydrates while carbon dioxide and water are formed. Carbon dioxide leaves the body with the exhaled air (exhale air from a human contains about 4% carbon dioxide.2 )

The outdoor content of carbon dioxide varies from around 350 in rural areas to 500 ppm or higher in urban areas. Outdoor sources are burning fossil fuels, such as gas and oil, transport, industry, and electricity generation.

Indoors you can find much higher concentrations of carbon dioxide. And why is that? Because we breathe out carbon dioxide. We breathe in air, oxygen is consumed and CO2 is formed. At rest, a person produces 15 grams of CO2 per hour. With very heavy effort, the figure can increase to 600 grams per hour. So, the accumulation indoors is normally related directly to the number of people. But it can also come from non-living sources, such as space heaters, clothes dryers, stoves, or any other unvented gas-burning appliance.

And why should we care about carbon dioxide levels? They hardly ever cause any long term health problems, but short term it can cause common symptoms such as headaches, drowsiness, difficulties concentrating and a decrease in productivity / cognitive thinking skills.

Carbon dioxide is normally used as an indicator of air quality. When the carbon dioxide levels are high it’s an indication of stagnant, stale air which normally has more particles and emissions which in turn can cause other problems both for your health and for the building.

What are high carbon dioxide levels then?

400-800 ppm is the ideal state when you would feel comfortable. In well-ventilated homes or premises the carbon dioxide concentration is usually around 600-800 ppm.

2,000 ppm      Fatigue increases as does the chance of headaches according to many studies.

1,000 ppm      Recommended maximum level in Sweden and many other countries.

800 ppm         Often recommended as maximum level for the staff to perform optimally.

Usually it is actually the absolute value of CO2 that is measured, instead of the relative value which is more relevant to really understand the effect.

The best way to reduce carbon dioxide is to increase the airflow by turning up the ventilation system. If that’s not possible, opening doors or windows is the easiest way. Assuming that the outdoor air is clean of course.

We would like to promote a modern, demand controlled indoor climate system. This means that the air flow adapts automatically depending on how many people are in the room. Securing that you always have a healthy and productive indoor air quality.

In our next blog post we will explore volatile organic compounds, another important parameter when it comes to good indoor air quality.